The Valley Forge Minutemen, a proud member of the AYHL, are pleased to announce that Hadley Hartmetz (’01) has committed to play at Shattuck-St. Mary’s Prep School in Faribault, Minnesota for the upcoming 2016-17 season.

Hartmetz, 15, most recently represented the Minutemen Bantam Major team during the 2015-16 season, recording 8 points (2G, 6A) as a blueliner in 29 AYHL contests. The Phoenixville, PA native was also the sole girl competing in the AYHL’s bantam major boys division last season – a major selling point for Division 1 girl’s programs.

““She’s a Competitor!” was by far the most common feedback the D1 coaches gave me in our discussions about Hadley” says last season’s Minutemen coach Andy Rummel. “They were clearly impressed by her skill set and understanding of the game, but it was her competitiveness against players who were almost always bigger and stronger, that was their biggest attraction to Hadley.” This competitiveness has already started to pay off for Hartmetz, who accepted a spot to Shattuck-St. Mary’s to help their girls U16 & U19 teams defend their 2015-16 National Championship titles.

“I know that I will be playing with and against the top girl players in North America. I expect to help my team to win another National Championship this season by playing solid defense, contributing on offense, and being a leader” says Hartmetz when asked about her upcoming season at Shattuck. Beyond Shattuck, Hartmetz has already gotten interest or standing scholarship offers from twelve Division 1 colleges.

On her path to prep school, and one day D1 college hockey, Hartmetz acknowledges the Minutemen, stating “…the organization was instrumental in my hockey and personal development…” She goes on to say, “The quality coaches focused on skills and pushed us outside of our comfort zones…we also learned the meaning of leadership, mental toughness, and the off-ice commitment that is required to be a top hockey player.”

The Minutemen wish Hadley all the best next season and would like to thank her for starting and finishing her tier 1 youth hockey career in Blue & Gold!! 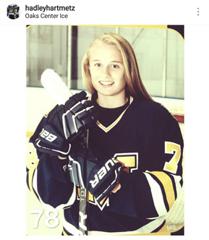